There are moments when you’re searching for employment that are downright depressing.  It’s like looking at the wasteland of all your half-finished schemes and things you could have done differently.  In my case, I feel overqualified for some of the opportunities and the things that I actually want to do I don’t have the experience for.

We all know the importance of hustling, that there will be sacrifices and fatigue so severe you want a short reprieve.  That if you really want to go after your dreams, you sometimes have to start in the mailroom.  I understand all of this but I just think all the years we spent on gaining an education should count for something.  Because I chose the path of a graduate education, that event planning position that I would pay to have now probably is not feasible.  I’ve always wanted to be a party planner, I was just afraid that it was not “legitimate” enough and what a shame.  I should have started in the mailroom in my early twenties right out of undergrad.  Hindsight is 20/20.

What a waste to regret anything though.  You’re allowed one day to mope and that’s it because after that you’re just wallowing.  Growing up means that you look at what you are trained to do and frame it for a position that you would be proud of and love.  I understand the value of going after what you want but some dreams are not meant to come true and that’s alright.  Not all of us can be rock stars.

I just thought that I would have it together by now.  In a year or two I know that things will be clearer and beginnings are what you have to muddle through.  Growing up with Sex and the City I imagined myself a certain way in my mid-thirties.  I still have time, it’s all about being strategic right?  Every girl plays the game of deciding which character they are.  Most people would say that I’m Charlotte.  It’s true, I’m proper, traditional in many ways and cringe at some aspects of subversive culture.  But I always admired Carrie’s vulnerability.  Her flaws made her so much more relatable.  She was not always the greatest friend, partner or even person but you still loved her.  I’d say most of us have aspects of all four characters: Miranda’s drive, Samantha’s bravery, Carrie’s confidence and Charlotte’s heart.  I know that the show Girls is written with a similar goal to empower women, but perhaps with more of an edge.  Goodness gracious Ms. Dunham you are smart.  Both are valuable, but Carrie and co. are so much more aspirational.  I love you Lena but I would choose their careers and wardrobes over that version of reality any day.  Life’s a mess but I don’t really need to see it in technicolour all the time. 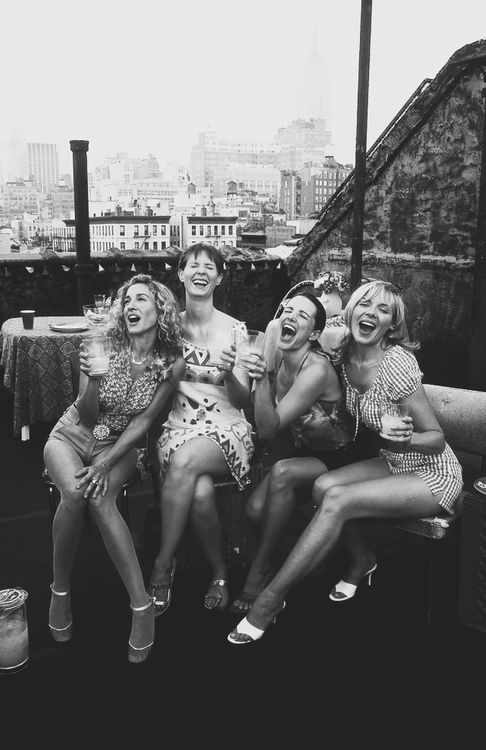